Worthy of the baths, “city zen”

Installed in the hollow of a inspirational landscape, Digne les Bains is undeniably inhabited by many curiosities. Prefecture of the department, Digne les Bains is also known to be the Historical capital of lavender. Between the Alps and Provence, the city stretches in a landscape of medium mountains. This assures him exceptional air quality very low humidity. Thus, far from the pollution of large urban centers, Digne les Bains has the charm and sweetness of an average city that takes care of itself. 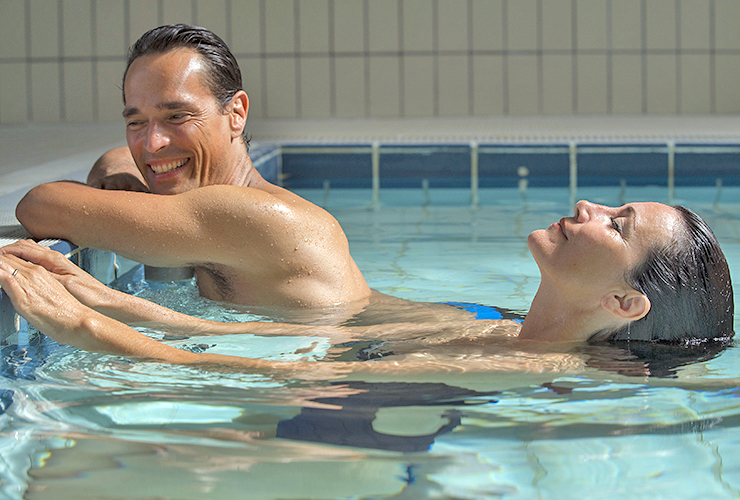 At the confluence of rivers Bleone, Mardaric et Hot Waters, the city is distinguished by the beneficial presence of mountain water. For treatment, well-being or physical activity, the city combines the many benefits of water. Worthy the baths is a Spa enjoying a strong national reputation.

Since antiquity, the presence of hot waters has been a natural resource for the city, which has developed a thermal activity. Springing at 50° at the exit of the borehole, the waters are at the same time chlorinated, sulphated and calcic. They benefit from significant mineralization whose constant composition is guaranteed by their deep underground origin (870 meters). The waters of Digne are specially recommended for respiratory diseases and rheumatology. Thanks to the quality of the air, the spa is also well suited to welcoming people with asthma.

In addition, the thermal baths offer a zen space dedicated to relaxation, beauty treatments and fitness. You have the choice between aromatherapy, Tibetan massage with a Kansu bowl, light therapy baths or even aquagym, aquarelax… Soon, the thermal baths will host a spa.

The breath of water 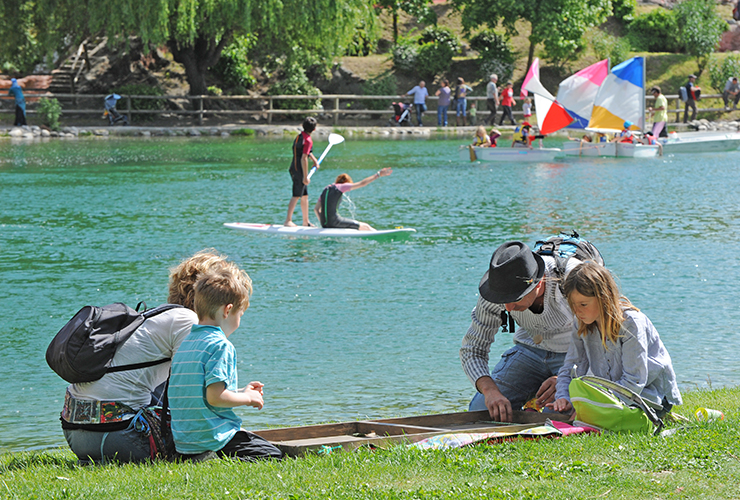 If since antiquity Digne les Bains has been recognized for the presence of its thermal baths, it also has a set of beautiful aquatic equipment dedicated to relaxation and fitness. In the city center, the hot water aquatic complex is open all year round. This covered area, unique in the department, combines a sports pool and family fun pools, perfect for children. When the fine weather arrives, the terraces open up to offer an original setting for relaxation in the heart of the city. Further from the center, on the road to Nice at the entrance to the city, is the Ferréols lake. From the center, it can be reached by bus, car or bicycle, but also on foot (plan for a pleasant XNUMX-minute walk on the banks of the Bléone). On site, you will enjoy restaurants and beautiful grassy beaches, shaded and supervised in summer.

Past the body of water, the river continues its path and leads us towards the Gaubert lake. The calm atmosphere of the place is conducive to both fishing and wildlife observation. For example, depending on the season, you can see beavers, water hens and other gray herons. Taking the time to follow the course of the water by bike, from the city center to Lake Gaubert is an excellent way to soak up the natural energy of this territory. 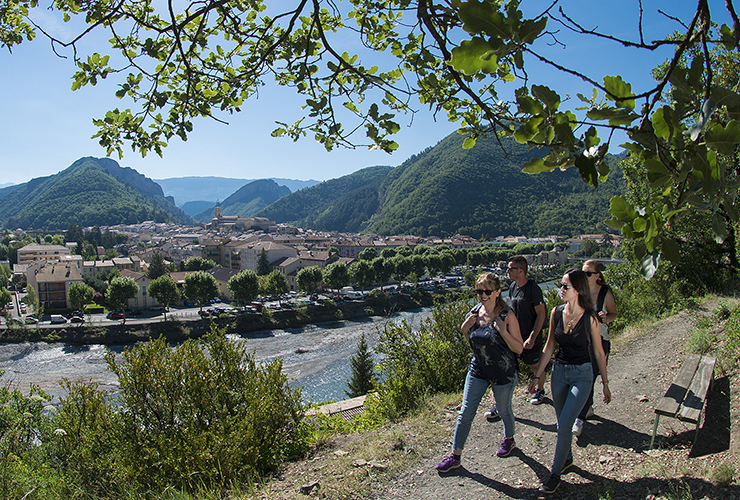 If Digne les Bains is a city where it is good to relax in contact with water, it also encourages you to move. Indeed, it would be wrong to resist the call of nature! How can you resist the urge to fill your eyes and lungs? On foot, by bike, suspended from paragliders or even clinging to the cliffs, all the conditions are met to satisfy the desire to exercise. Solo, with friends, accompanied by professional guides, Digne les Bains has a wide choice outdoor activities to recharge.

Let's start with walking or running. In this, a very pleasant way to get to know the city is to go around it by the paths that crisscross the surrounding mountains. From the town centre, you quickly reach the woods of pines and oaks to easily reach superb viewpoints. In particular, the trails of Three chapels, Caguerenard to donkey ears offer three beautiful height profiles of the city.

Another impressive, if not vertiginous, walk, that of the nine o'clock rock which leads us to the foot of the via ferrata with its cliff over 100 meters high. Need a little more height? Those who love rock climbing will quickly find the path that leads to the 80 routes of the Rock of Courbons. Finally, for those who are a little tired of the hard surface, the discovery of Digne from the vaulted canvas of a paraglider will certainly offer one of the most beautiful point of view ! 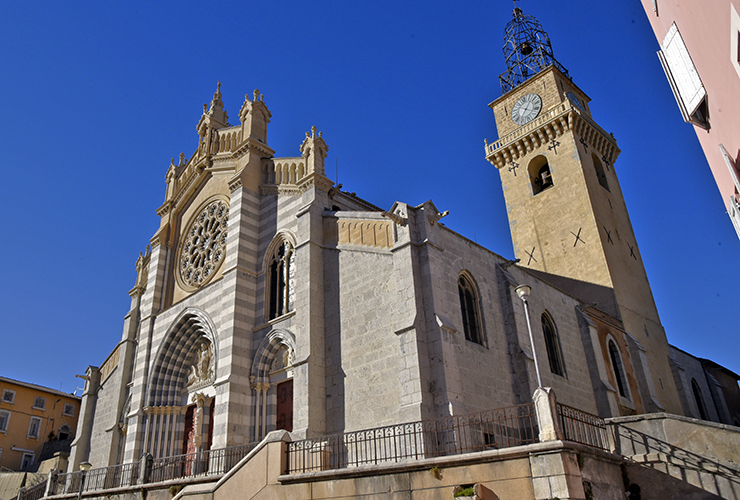 It is easy to imagine that the old centre, located in the Rochas district, is the historic seat of the city. Indeed, here dominate the majestic Saint Jerome Cathedral, of Gothic architecture and the Clock tower, surmounted by one of the most beautiful bell towers of the region. In fact, the city has its roots a little further north, in the Bourg district. Indeed, it is here that in the XNUMXth century the Cathedral was built Our Lady of the Village, on the remains of Roman villas. Remarkable Romanesque building, the Cathedral houses a crypt which contains a unique pile of archaeological, Gallo-Roman and medieval remains.

It is later that the city will move towards Rochas, hill which dominates the old center. In the XNUMXth century, the bishop had his castle (at the location of the current prison). Little by little, the population came to take refuge there and, in the XNUMXth century, ramparts will be built at the foot of the hill. After the great plague of the XNUMXth century, the city will expand beyond the fortified enclosures to take its current form. The fortifications are destroyed and few traces of medieval times will survive all these changes. However, the current restoration of the center brings back some very beautiful elements. The Tourist Office offers guided tours from the center to discover the history of the city.

During the visit to the center, the ascent of rue Saint Charles up to the Saint Jérôme cathedral will be rewarded with an unparalleled view over the roofs of the city where the late afternoon light covers the facades of the houses with warmth. 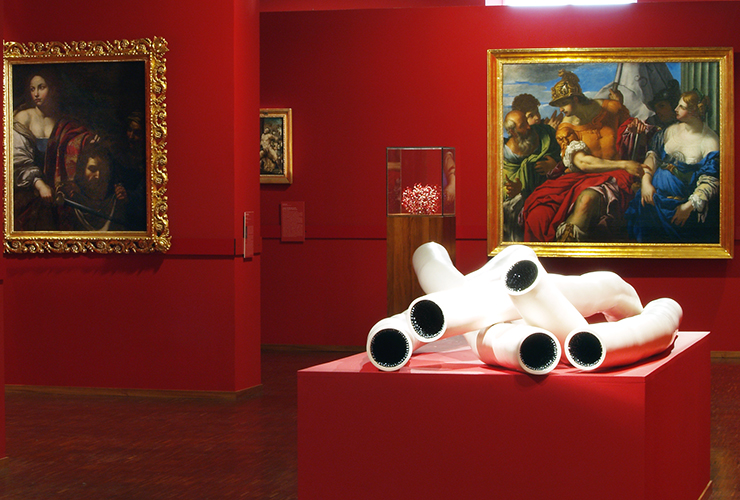 Digne les Bains contains many other treasures that can be found in the Gassendi Museum, a historical museum founded in 1885. Pierre gassendi, who gave his name to the Museum, was a dignified humanist and astronomer. He was the contemporary of all the scholarly elite of the Age of Enlightenment, Descartes and Galileo. Under the benevolence of Gassendi, the Museum organizes an original museography. Indeed, the public wanders along a porous border where art and science intersect, like these enigmatic hydropithecines.

Contemporary art goes far beyond the borders of the Gassendi Museum. It is rooted in the surrounding nature, the beginning of all inspirations. For example, Andy goldsworthy designed there Refuge of Art, a key work that recalls mountain life that has now disappeared. Other artists, like Herman de Vries, Richard Nonas, Joan Fontcuberta, Paul-Armand Gette, Jean-Luc Vilmouth, Trevor Gould ou Stephane Berard, reveal in their own way the relationships that humans can form with their natural environment.

Back in Digne, inside the Promenade Museum, new works can be seen in the showroom of the CAIRN (Informal Art Center for Nature Research). Then we will take advantage of the tranquility of the paths to discover the permanent collection installed in the open air. The stroll will end in the rooms of the museum dedicated to geology. the museography delivers an impressive collection of fossils.

The city is a world pioneer in the preservation and enhancement of the geological heritage. In the 80s, she saw the birth of the first Geological Nature Reserve of France. In 1991, under the aegis of UNESCO, it becomes the seat of the International Declaration of the Rights of the Memory of the Earth. In 2004, she was the cradle of the very first geopark in the world ! 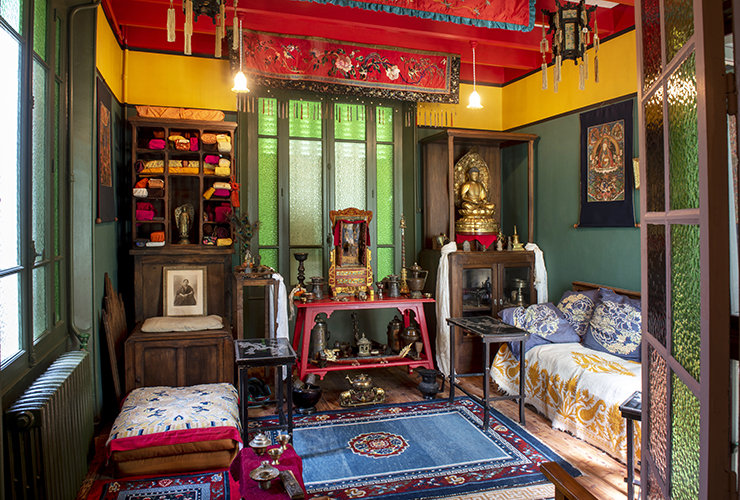 If Digne les Bains is the starting point for many explorations, it is undoubtedly because it is also a city of explorers. The most famous of all being certainly Alexandra David Neel ! A figurehead of Orientalism in the 1924th century and a committed intellectual, she was the first European woman to enter the forbidden city of Lhasa in 20. At the end of the XNUMXs, she moved to Digne les Bains, " his Himalayas for Lilliputians ". Here, she will continue her remarkable work, both in terms of her standards and her commitment. Alexandra David-Neel will keep here all the objects, notes, photos and other ethnographic documents from her travels. She will baptize her house with the evocative name " Samten Dzong (Residence of reflection).

When she passes away, the explorer will designate the city as universal legatee of the house, the copyrights and the archives. A priceless heritage! Thus, the Alexandra David-Neel House will continue to operate as a museum and interpretation center dedicated to the author, Himalayan and Buddhist culture. The house will be listed in the inventory historical monuments in 1996. And in 2008, she will be recognized XNUMXth century heritage by the Ministry of Culture and Communication. 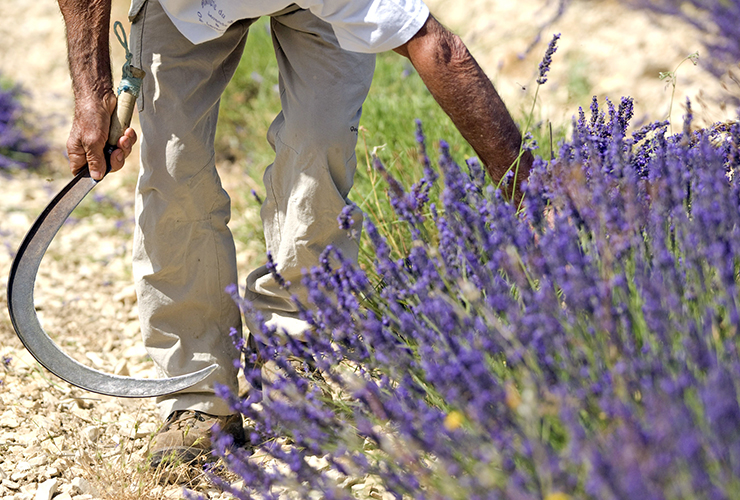 Digne les Bains is a town where parties are popular by tradition. The summer months are the high point of all celebrations and lavender is the star. Indeed, the " blue strand“is ubiquitous in Provençal culture. the Lavender Museum faithfully describes the historical importance of the plant in Haute Provence. The most recognized of the festivals is undoubtedly the Lavender Parade. Since 1939, this institution takes place on the first weekend of August. The city then puts on its costume of light and draws visitors and Dignois to the rhythm of parades of flowered floats, brass bands and other marching bands. The big carnival is in full swing.

La Lavender Fair, meanwhile, occupies the large square of Digne les Bains, at the end of August. You can find all the products from the cultivation of lavender: essence of lavender, soaps, honey... Like the Corso, the fair is also an institution, organized since the 1920 years. At the time, it came to close the cutting period. The challenge then was to promote the essence of lavender in order to make its various properties known to the greatest perfumers. Over the years, the Lavender Fair has gained notoriety. Attracting a large number of merchants and visitors, it becomes an opportunity to take advantage of very good opportunities!

During the Corso or the Fair, many producers come to give distillation demonstrations. This is particularly the opportunity to meet colorful characters and share the art of living in Haute Provence!

Finally, since 2015, when September arrives, the Festival at the Topfestival current music, enters the scene. Resolutely turned towards the amplified melodies of contemporary French-speaking pop song, the festival marks the turning point of the end of summer and the start of the school year. Ending the summer holidays in style or stimulating to start the year, the festival is gaining in popularity and maturity. The gang of friends which is the initiative of the festival, also carries a project of rehabilitation of the "top", old cinema of the city. Place of artistic diffusion, the building would once again become in its own right, a central place of life.