The Route comes from Occitan far the road » which literally means to go on the path, to take the road and then to transhume. A Franco-Italian project whose objective is the development of territories around the practice of transhumance and tourist roaming, the project is the result of more than ten years of exchanges between the House of Transhumance (Salon de Provence) and Unione Montana Valle Stura (Italian Piedmont) and aims to implement and lead a cross-border route and network linking the Crau plain to the Stura valley.

The long-distance hiking route GR®69 La Routo, thus connects the plains of lower Provence to the Alpine valleys of Piedmont by relying on the old drailles and carraires, in the footsteps of the sheep herds who practiced the great summer transhumance.

La Routo, is a 520 km itinerary on transhumance paths, from the plains of lower Provence to the alpine valleys of Piedmont and a large part of which crosses the Alpes de Haute Provence and Haute Provence.

The La Routo project aims to enhance and animate a route in the footsteps of this great historical transhumance. It is a pedestrian route but with sections just as well suited to equestrian practices as mountain biking and VTTAE.

The course is homologated as a trail of Great Hike GR®69 by French Federation of Hiking. Currently being developed, it is based on the many existing routes, in particular long-distance hiking and short-distance hiking trails.

The route – the stages

The route consists of 33 stages starting from Arles, in the Rhône delta and the Crau plain, passing through the Var. The route joins the Alpes de Haute Provence via Gréoux-les-Bains, the Valensole plateau, Digne-les-Bains, Seyne les Alpes and Barcelonnette to continue to the Col de Larche in the direction of Cuneo, in the Valle Stura (Italy). Haute Provence, hosts stages 13 to 19. 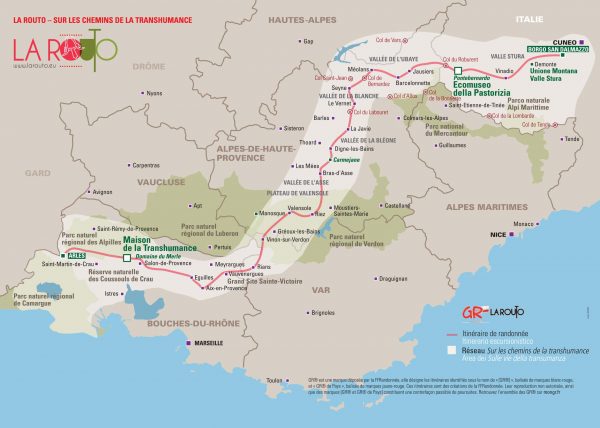 The project has received funding from the following communities and institutions.